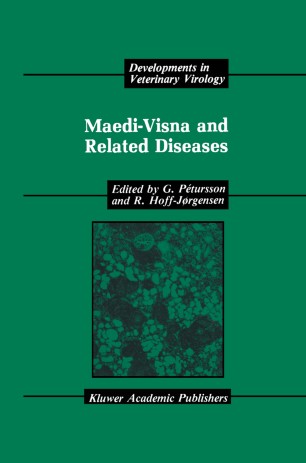 G. Petursson and Rikke Hoff-J0rgensen The concept of slow viral infections was first put forward in 1954 by Dr. Bjorn Sigurdsson, an Icelandic physician who had been studying some sheep diseases which were introduced into Iceland with the importation of a foreign breed of sheep in 1933. Sigurdsson's main criteria for defining slow infec­ tions were a very long initial period without clinical signs lasting months or even years following infection and a rather regular protracted, progres­ sive course, once clinical symptoms had appeared, usually ending in serious disease or death. Sigurdsson included in this list of slow infections maedi -visna, infectious adenomatosis of sheep, scrapie in sheep, Bittner's mam­ mary carcinoma and Gross' leukemia in mice. All of these diseases, except scrapie, are caused by retroviruses. The characteristics of slow infections as described above are of prac­ tical importance for epidemiology, diagnosis and control of these diseases. For many years the slow infections remained primarily a veterinary problem, mainly affecting sheep and goats in certain countries. In recent years, how­ ever, the human immunodeficiency virus (HIV) causing acquired immunodefici­ ency syndrome (AIDS), has suddenly appeared in many countries of the world and brought the slow infection concept forcefully to the attention of the medical profession. The disease problems and the economic effects of slow infections of sheep and goats are increasingly recognized in various coun­ tries. For the reasons stated above we feel that this book should be useful for veterinarians and physicians alike.