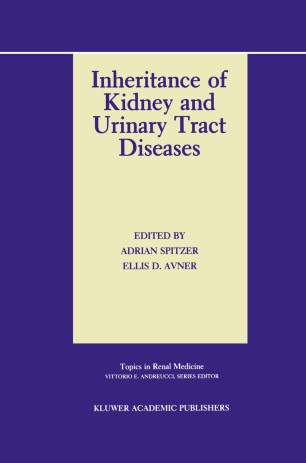 Genetic disorders have emerged as a prominent cause of morbidity and mor­ tality among infants and adults. As many as 10% to 20% of hospital admis­ sions and at least 10% of the mortality in this age group are due to inherited diseases. There are at least two factors that have brought genetic disorders into the forefront of pediatrics. One is a great reduction in childhood mortality due to infections and nutritional deficiency states, and the other is the rapid progress made in the identification of genetic defects. Amniocentesis, chorionic villus sampling, and recombinant DNA technology have already had a tremendous impact on the practice of medicine. This is why the first two chapters of this volume are dedicated to general principles of molecular genetics and to a description of the techniques used to diagnose genetic disorders at the DNA level. The relevance of this new area of science to the study of inherited renal diseases is reflected in the large body of knowledge that has been generated regarding the association between various glomerular nephritides and genetic markers such as the HLA system, and even more impressively in the direct or indirect identification of abnormal genes or gene products in Alport's syn­ drome, autosomal dominant polycystic kidney disease, and Lowe's syndrome. These discoveries figure prominently in the pages of this book. Yet, the progress we have made has barely scratched the surface of the problem.