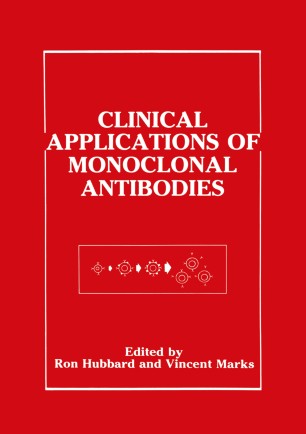 Immunology has come a long way in the hundred or so years since the general concepts were first enuciated by Metchnikoff, Ehrlich, Von Bebring and others, One of the landmarks in this progress was the invention and development of monoclonal antibody secreting hybridomas by Milstein and bis co-workers in Cambridge. Unlike most modern inventions of this importance that of monoclonal antibody production was made available to the scientific community tbroughout the world unimpeded by patent protection. This may explain tbe unusual rapidity witb which it has been applied to the benefit of mankind in general. This book, representing as it does the proceedings of tbe first International Symposium to be held on the clinical appli­ cations of monoclonal antibodies, shows just how much bas been achieved within the space of little more than a decade. The enormaus promise of monoclonal antibody technology, which became apparent soon after its discovery, has already progressed a long way towards fulfillment. The contributors to tbis volume, all of whom are actively engaged in monoclonal antibody development and application, represent the state of the art. Professor Vincent Marks V INTRODUCTION It has been some twelve years since the pioneering experiments of Köhler and Milstein led to the discovery of monoclonal antibodies. Single molecular species antiborlies with desired specificities could be produced by the fusion of antibody - producing cells with neoplastic cells.