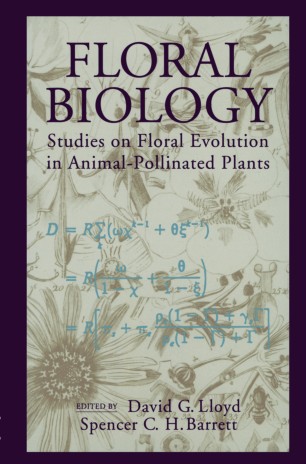 Studies in floral biology are largely concerned with how flowers function to promote pollination and mating. The role of pollination in governing mating patterns in plant populations inextricably links the evolution of pollination and mating systems. Despite the close functional link between pollination and mating, research conducted for most of this century on these two fundamental aspects of plant reproduction has taken quite separate courses. This has resulted in suprisingly little cross-fertilization between the fields of pollination biology on the one hand and plant mating-system studies on the other. The separation of the two areas has largely resulted from the different backgrounds and approaches adopted by workers in these fields. Most pollination studies have been ecological in nature with a strong emphasis on field research and until recently few workers considered how the mechanics of pollen dispersal might influence mating patterns and individual plant fitness. In contrast, work on plant mating patterns has often been conducted in an ecological vacuum largely devoid of information on the environmental and demographic context in which mating occurs. Mating-system research has been dominated by population genetic and theoretical perspectives with surprisingly little consideration given to the proximate ecological factors responsible for causing a particular pattern of mating to occur.