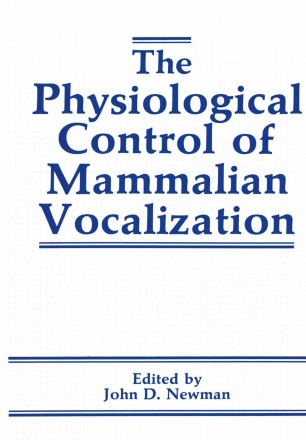 The Physiological Control of Mammalian Vocalization

To the majority of biologists, the physiological control of mammalian vocalizations is only a small part of the large field of motor physiology. It is indeed a very specialized part, and the number of scientists dealing with it is relatively small. Still, it is an autonomous subject embracing more than the motor control of the body and is, therefore, by far more complex. Anatomically, essential cerebral structures involved in the control of gross and fine movements of the mammalian body seem to participate in the control of the voice as well. The central control system, however, as well as the larynx (the primary effector organ), possess features not found in the remaining motor system. An example is the perfect synergism of the many muscles which control the m. vocaZis, not to speak of the speed of successions in which this occurs. Furthermore, this muscle, similar to the facial muscles, is segmentally adjustable independently of the joints. The most remarkable feature of the central control area, however, seems to be the effector organ's manifold direct and indirect dependence on the limbic system of the brain. This makes the voice--like no other motor organ (with the partial exception of the facial musculature)--the chief organ for the expression of emotion and the indicator of behavioral states. Except in man, the voice is in­ dependent of neocortical control. Animal vocalizations are species­ typical and genetically programmed. Ethologically, they belong to the behavioral class of fixed action patterns.