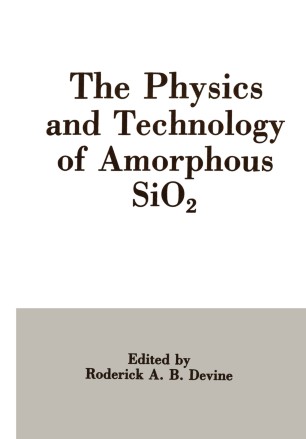 The Physics and Technology of Amorphous SiO2

The contents of this volume represent most of the papers presented either orally or as posters at the international conference held in Les rd th Arcs, Savoie, from June 29 to July 3 1987. The declared objective of the conference was to bring together specialists working in various fields, both academic and applied, to examine the state of our under­ standing of the physics of amorphous sioz from the point of view of its structure, defects (both intrinsic and extrinsic), its ability to trans­ port current and to trap charges, its sensitivity to irradiation, etc. For this reason, the proceedings is divided, as was the conference schedule, into a number of sections starting from a rather academic viewpoint of the internal structure of idealized Si0 and progressing 2 towards subjects of increasing technological importance such as charge transport and trapping and breakdown in thin films. The proceedings terminates with a section on novel applications of amorphous SiOz and in particular, buried oxide layers formed by ion implantation. Although every effort was made at the conference to ensure that each presentation occured in its most obvious session, in editing the proceedings we have taken the liberty of changing the order where it seems that a paper was in fact more appropriate to an alternative section. In any event, because of the natural overlap of subjects, many papers could have been suitably placed in several different sections.