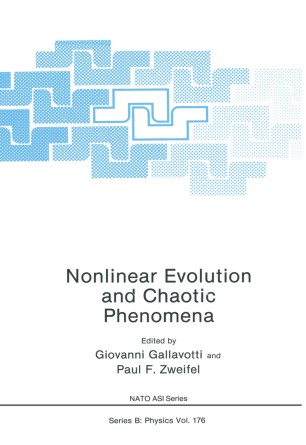 This volume represents the proceedings of a NATO Advanced Study Institute held at Noto, Sicily June 8-19, 1987. The director was Giovanni Gallavotti, Roma, with co-directors Marcello Anile, Catania and P. F. Zweifel, Virginia Tech. Other members of the scientific organizing committee included Mitchell Feigenbaum, Rockefeller University and David Ruelle, IHES. The attendance at the school consisted of 23 invited speakers and approximately 80 "students", the term student being in quotation marks because many of them were of post-doctoral or even professorial status, although there were also a goodly number of actual graduate students in attendance also. Because of the disparate background of these "students", it was felt advisable to include at the conference special tutorials each afternoon, in which the contents of the morning's lectures were reviewed and clarified as necessary. These tutorials, organized by Gallavotti, involved various of the speakers, organizers, and other senior members of the school, and contributed in no little way to the overall success of the school. The organizers of the school would like to take this opportunity to thank all of those who assisted in these sessions, and to assure them that the results were definitely worth the effort. Also contributing to the success of the school were a number of contributed papers, presented during the course of the afternoon tutorials. Three of those papers are included in these proceedings; they are the papers of DiFrancesco; Gallimbeni, Miari and Sertorio (presented by Sertorio); and Vittot.