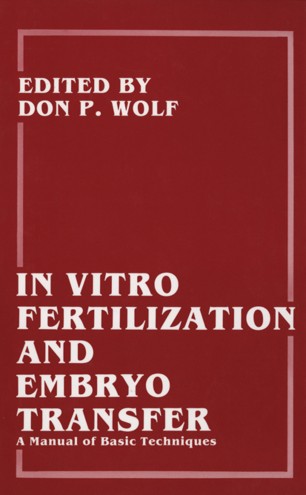 In Vitro Fertilization and Embryo Transfer

A Manual of Basic Techniques

The use of human in vitro fertilization in the management of infertility is the outgrowth of years of laboratory observations on in vitro sperm-egg interaction. "The editors of this work have themselves contributed significantly to basic knowledge of the mammalian fertilization process. The observations of Don Wolf on sperm penetration, the block to polyspermy and, most recently, sperm hyperactivation in the monkey and human, Gregory Kopf's elucidation of the mechanisms of sperm activation during penetration and the reciprocal dialogue between sperm and egg, and Barry Bavister's definition of culture conditions and requirements necessary for in vitro oocyte maturation, fertilization and development in model mammalian systems including nonhuman primates have contributed greatly to our understanding of the mammalian fertilization process. Wolf, Kopf and Gerrity have enjoyed substantial interaction with clinicians in Departments of Obstetrics and Gynecology and have been directly involved with successful IVF programs. Both Wolf and Kopf have served as research scientists in the Division of Reproductive Biology at the University of Pennsylvania, which, for more than 22 years, has fostered co-mingling of clinically oriented and basic science faculty. It is through such interaction, which clearly exists at many institutions including the University of Wisconsin, that the process of technology transfer is best served. Without an exquisitely coordinated laboratory, there can be no consistent success in human in vitro fertilization. Quality control is pivotal, but close collaboration between the laboratory and the clinic is also essential as information is shared and correlated.