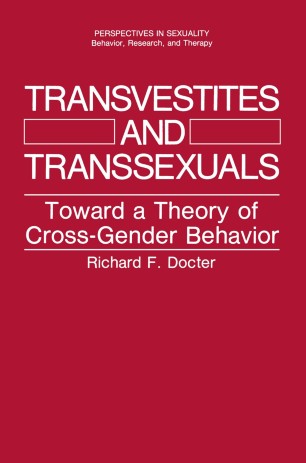 Toward a Theory of Cross-Gender Behavior

Part of the Perspectives in Sexuality book series (PISE)

The objective of this book is to propose a theory of transvestism and secondary transsexualism, and to provide information concerning these behaviors. My view of these topics is much like that of Benjamin (1966) and nearly all other gender researchers. It holds that a syndrome of similar behaviors can be identified, ranging from fetishism through transvestism, transgenderism, and secondary transsexualism. But de­ scription is one thing and explanation of causes is another. I agree with other gender researchers (e. g. , Green & Money, 1969; Stoller, 1985c) who have concluded that the causes of transvestism and transsexualism re­ main largely unknown. But the fact that we cannot fully explain the origins of transvestism or secondary transsexualism does not mean that a comprehensive theory is impossible. Indeed, excellent theoretical statements have been proposed concerning each of these topics (Ban­ croft, 1972; Buckner, 1970; Buhrich & McConaghy, 1977a; Money & Ehrhardt, 1972; Ovesey & Person, 1973, 1976; Person & Ovesey, 1974a,b; Stoller, 1968a, 1974, 1985c). It is with considerable respect, therefore, that we acknowledge both the strong shoulders on which we stand, and also the more practical fact that we have drawn heavily upon the many contributions of these researchers. The approach I have adopted has the same scientific difficulties that confronted all of these previous workers.