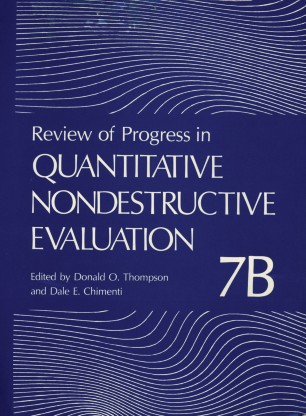 It has been shown both experimentally {2} and theoretically {2,3} that surface skimming SH waves propagating along symmetry axes of the texture have velocities that differ in proportion to the magnitude of any stress that lies along one of the symmetry axes. Specifically, the stress is directly proportional to the relative velocity difference through the equation -,--V ik=---V. -=ki) ( I) cr. = 2G (-V ~ ik where cr. is the stress in the direction i, G is the shear modulus and Vik is the ~elocity of an SH wave propagating in the i direction and polarized in the k direction. This rather simple relationship is particularly useful because the constant of proportionality involves only the well known shear modulus and the velocity term can be measured directly by observing the transit time shift when a transmitter-receiver pair of SH wave transducers are rotated through 90 degrees on the surface of the part. Experimentally, Equation (I) was tested on the web of railroad rails which had been loaded by a 200,000 pound mechanical testing machine {I}. The method of exciting and detecting the necessary surface skimming SH waves used electromagnetic acoustic transducers (EMATs) that operated through a magnetostrictive mechanism at high magnetic fields {4}. Wave velocities parallel and perpendicular to the axis of the rail on the web differed by the amount predicted by Equation (I) to an absolute accuracy of 30 percent in the worst case.