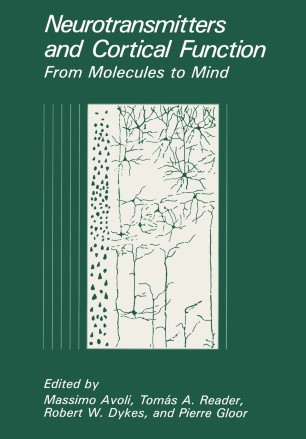 From Molecules to Mind

Herbert Henri Jasper is a scientist whose research activities have initiated and encompassed many of the major themes of neuroscience. He has pioneered in single unit recording, chronic neuronal studies, neurochemistry, electroencephalography, and many other disciplines. His students now hold important positions in universities and hospitals around the world. From July 21 to 23, 1986, a symposium entitled Neurotransmitters and Cortical Function: From Molecules to Mind was held in Montreal to honor Professor Jasper and to continue his pioneering efforts. The following chapters originated in that meeting. They summarize the current v vi PREFACE status of our knowledge in some of the fields influenced by Professor Jasper. They share a focus on neurotransmitters in cortical function, where we presume higher mental events originate. Professor Jasper has made contributions to the understanding of three different classes of neuro­ transmitters: GABA, acetylcholine, and catecholamines. It is an interest in trying to link neu­ rochemical events to some aspects of complex brain function and behavior that has characterized his work, and it is this philosophy that led to the present symposium to honor him. We dedicate this volume to Professor Jasper and the integrative approach that he has fostered. The Editors Montreal Contents 1. H. H. Jasper, Neuroscientist of Our Century .......................... .