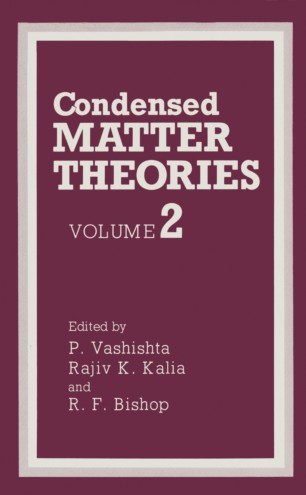 The second volume of Condensed Matter Theories contains the proceedings of the 10th International Workshop held at Argonne National Laboratory, Argonne, IL, U.S.A. during the week of July 21, 1986. The workshop was attended by high-energy, nuclear and condensed-matter physicists as well as materials scientists. This diverse blend of participants was in keeping with the flavor of the previous workshops. This annual series of international workshops was"started in 1977 in Sao Paulo, Brazil. Subsequent'workshops were held in Trieste (Italy), Buenos Aires (Argentina), Caracas (Venezuela), Altenberg (West Germany), Granada (Spain), and San Francisco (U.S.A.). What began as a meeting of the physicists from the Western Hemisphere has expanded in the last three years into an international conference of scientists with diverse interests and backgrounds. This diversity has promoted a healthy exchange of ideas from different branches of physics and also fruitful interactions among the participants. The present volume is a continuation of the effort started last year when the invited papers from the 9th International Workshop were published by Plenum Press. Our only trepidation in organizing a book of this kind stemmed from the diversity of the material, which did not lend itself easily to well-defined topics. Still, the articles are loosely divided into eight categories, where the papers in each category have either a common theme or the same underlying technique.