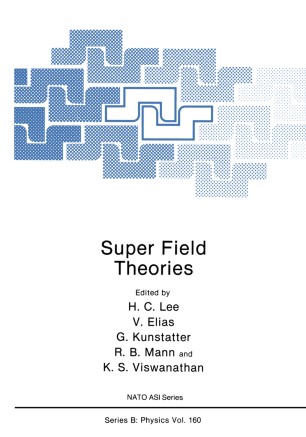 The Super Field Theory Workshop, held at Simon Fraser University, Vancouver, Canada July 25 - August 5, 1986 was originally intended to be a sequel to the 1983 Chalk River Workshop on Kaluza-Klein Theories and the 1985 Workshop on Quantum Field Theories held at the University of Western Ontario. The scope of the workshop was therefore not to be very big, with a program of about 20 papers, an anticipated 30 to 45 participants, and with much time scheduled for discussion and personal contact. These goals were soon changed in the face of wide interest in the workshop, both for participation and for giving talks, so that the workshop materialized with about 90 participants and 40 talks. This volume contains the texts, some considerably expanded from the oral version, of most of the talks pre­ sented at the workshop. Not included are a few talks whose manuscripts were not made available to the editors. In the last few years the subject of particle physics and unified field theory has developed in a way not witnessed in the last fifty years: a confluence with mathematics, especially in geometry, topology and algebra at an advanced level. This has vastly expanded the horizon of the disci­ pline and heightened the expectation that a true understanding of the fun­ damental laws of physics may soon be within reach. Most aspects of this new development are covered, many in pedagogical detail, by articles in this volume.