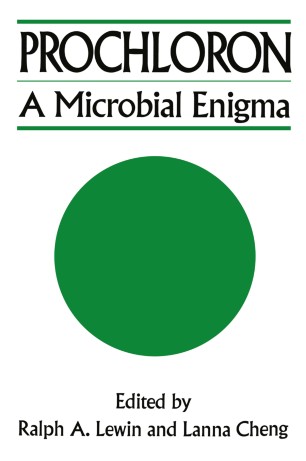 Ralph A. LewiQand Lanna Cheng In physics, the discovery of new (more properly, hitherto undetected) particles has often resulted from a search: like the discovery of America, their existence had been postulated but their actual existence awaited confirmation. In biology, new discoveries are rarely made in this way. The existence of an alga like Prochloron, as a putative ancestor of chloro­ plasts, had been postulated, but in fact its discovery was a consequence of fortuitous events. Green algal symbionts in didemnid ascidians had been known for decades to a few marine zoologists who had worked in coral reef areas, but nobody had bothered much about them. When we happened to find them, under boulders on a seashore in Baja California, Mexico, where we were taking part in a student expedition, we didn't bother much either at first, though they worried us a little. With our portable microscope we could see no nuclei in the cells, which, according to the dogma accepted at the time, indicated that they were blue-green algae-yet they didn't look blue-green. They were leaf-green, like green algae and higher plants. We made desultory attempts to grow them in culture, in variously enriched seawater media, but failed. (This proved to be a frustrating experience, all too frequently repeated on subsequent expeditions. ) We collected enough for electron microscopy, though, and transmission electron microscopy (TEM) studies indicated that the cells were unequivocally prokaryotic.