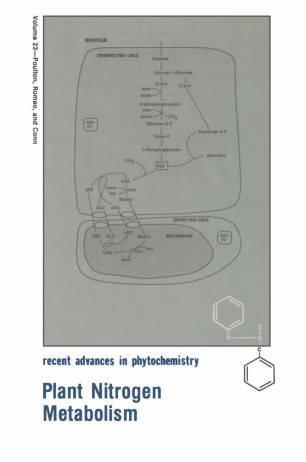 This volume is based on papers presented by invited speakers at a symposium entitled "Plant Nitrogen Metabolism" held in conjunction with the 28th Annual Meeting of the Phytochemical Society of North America. The meeting took place on the campus of the University of Iowa at Iowa City during June 26-30, 1988, and attracted 110 participants from 11 countries. The goal of the symposium was to trace the pathway by which nitrogen passes from soil and atmosphere into both primary and secondary nitrogenous metabolites, focusing upon areas which were felt to be most rapidly expanding. From nodulines (nodule specific proteins) and GS/GOGAT mutants to sugar mimics (polyhydroxyalkaloids) and herbicide inhibitors of amino acid metabolism, research in nitrogen metabolism has expanded into areas barely envisioned only a few years ago. Both the nitrogen specialist and the general plant biochemist will be pleased by the range of topics covered here. Following an overview in Chapter 1 of plant nitrogen metabolism, the remaining chapters are loosely organized into three groups. Chapters 2-6 deal primarily with the biochemistry and molecular biology of nitrogen assimilation and transport, Chapters 7-9 with amino acid metabolism, and Chapters 10-12 with secondary metabolites.