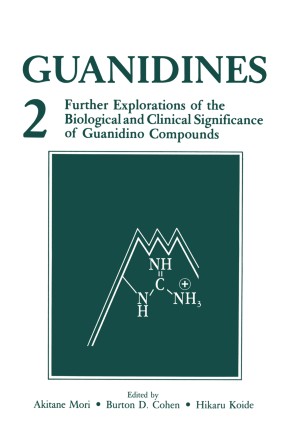 Further Explorations of the Biological and Clinical Significance of Guanidino Compounds

Guanidine is named for its similarity to the purine guanine which, in turn, is named for its principal source guano, which comes from the Inca word, huano, for dung. Guanidine, therefore, translates into dung-like, which is hardly a genteel way to introduce a subject. On the other hand, texts are seldom inspirational, "frequently crude and rarely literary and should be judged on how successfully they assemble, organize and present current data. I am impressed that the material which fol]ows goes a long way toward successfully achieving those goals. Tue International Guanidine Society is a synthesis of three groups of investigators: biologists studying guanidines as phosphagens, neurologists interested in guanidines as convulsants and nephrologists involved with guanidines as toxins. As a member of the latter group. I am gratified by the considerable progress this book represents. To begin with. there now appears to be a common theme which unifies current speculation concerning the metabolic origin of the guanidines in uremia. At the First International Congress in 1983, evidence was presented which supported the theory that certain guanidines were products of the mixed function oxidation of urea. This year's meeting brings together overwhelming data showing that methyl guanidine is an effect of active oxygen reacting with creatinine. An idolatry, worshipped throughout biochemistry, that urea and creatinine are inert byproducts of protein metabolism, is shown to have feet of clay.