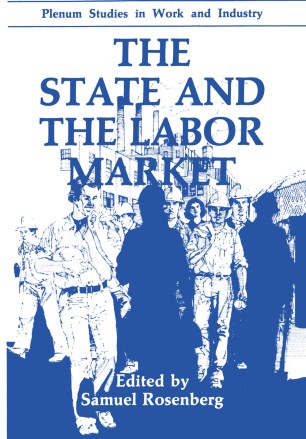 The State and the Labor Market

In the two decades before the mid-1970s, macroeconomic policies in Western Europe were frequently accompanied by policies of direct wage restraint in the pursuit of acceptable levels of employment, inflation, and international competitiveness. The same period witnessed a proliferation of social welfare programs, elements of which were sometimes commingled with demand management and pay policies in trilateral bargaining processes involving gov­ ernments, unions, and employers. In the wake of such subsequent develop­ ments as the oil price shocks, sharply intensified international competition, and slowing of growth rates in productivity, however, governments resorted more frequently to deflationist macroeconomic policies and also to policies aimed directly at increasing IIflexibility" in wage determination and the de­ ployment of labor by the firm. It is a major theme of this very interesting book that these labor market policies have not been demonstrably (or at least sufficiently) effective in com­ bating the high rates of unemployment which have been prevalent in most of the countries of Western Europe since the late 1970s. This theme emerges from the chapters on labor market developments and policies in six countries of Western Europe, the United States, and Hungary (a welcome addition to this type of scholarship), as well as another set of chapters'devoted to specific policy areas. In effect, Samuel Rosenberg and his colleagues-an interna­ tional team of nineteen economists and sociologists-are repeating in con­ crete terms a sermon preached by Keynes over a half century ago.