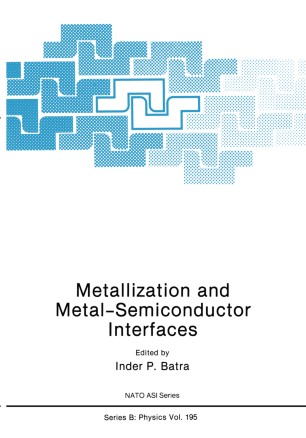 This book represents the work presented at a NATO Advanced Research Workshop on "Metallization and Metal-Semiconductor Interfaces", held at the Technical University of Munich, Garching, W. Germany from 22-26 August 1988. The major focus of the workshop was to evaluate critically the progress made in the area of metal-semiconductor interfaces. The underlying theme was the mechanism of Schottky barrier formation and a serious as­ sessment of the various models. A significant fraction of the workshop time was also spent in discussing the interaction of alkali metals with semiconductors. Alkali metals on semi­ conductors form ordered overlayers and the resulting system often exhibits one-dimensional metallic properties. The nature of their interaction has introduced new and exciting com­ plexities and this was pursued at length during the lively discussions at the workshop. A half a day was devoted to Scanning Tunneling Microscopy, the emphasis being on its utility in providing structural and electronic character of low-coverage regime. The book should pro­ vide readers with the most current status of the research activity in the general area of metal-semiconductor interfaces at an international level. It should also serve as an excellent introduction to the field, since sufficient review type of material has also been included The workshop organizers, Dr. I. P. Batra (Director), mM Almaden Research Center, San Jose, Prof. S. Ciraci, Bilkent University, Ankara, Prof. C. Y. Pong, University of California, Davis, Prof. Dr. F. Koch (Local Chairman), Technical University Munich, Garching, Dr. H.