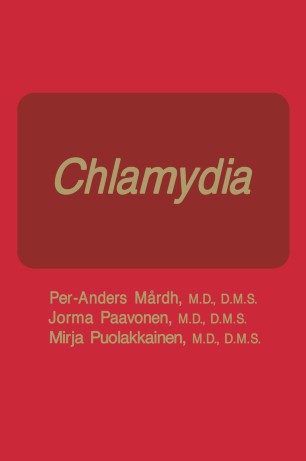 During recent decades, it has been firmly documented that chlamydiae are com­ mon and important pathogens in humans and animals. In humans, chlamydiae are known to cause trachoma (which is still one of the major blinding diseases in the world) and are also one of the most common etiological agents of sexually transmitted diseases and the sequelae thereof, such as infertility. In the last few years, it has also become evident that chlamydiae, i.e., the so-called TWAR agents, are common respiratory tract pathogens. Chlamydiae are also important pathogens in birds and lower mammals, in whom they cause a variety of infectious conditions, a spectrum which has in­ creased every year. Some of these infections occur as zoonoses, e.g., psit­ tacosis/ornithosis and, as recently discovered, abortion. Know ledge of the molecular biology and immunobiology of chlamydiae has expanded rapidly during recent years. Insight into the pathophysiology of chla­ mydial infections has also increased, and new methods for the diagnosis of chlamydial infections have been introduced. The importance of establishing control and preventive programs for chla­ mydial infections has become obvious in order to combat the present chlamydial epidemic. We hope that this book can usefully serve those who want to increase their general knowledge of Chlamydia and that it can act as a handbook and reference source for those involved in chlamydial research as well as for those working with chlamydial infections in medical and veterinary clinical disciplines, includ­ ing clinical laboratories.