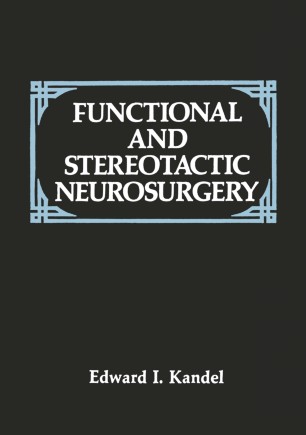 Soon after neurosurgery had advanced past the stage of that older neurosurgeons will consider their cra­ removing lesions on the surface of the brain, it became niotomies quite adequate for the relief of many neu­ apparent that subcortical diseased tissue could not be rological disorders that Professor Kandel shows so excised safely by the usual surgical techniques because clearly to be amenable to stereotactic intervention, of the risk of damaging overlying normal structures. there are many lesions that undoubtedly can be reached Various means of reaching deep-seated lesions were more easily and with less risk to life and limb by ster­ devised, most of which attempted to approach the eotactic than by open procedures. pathological tissue through "silent areas" of the brain. This book is not just a description of operative However, these operations often resulted in serious procedures, although it does give clear accounts of neurological deficits. Spiegel and Wycis's modifica­ surgical techniques. It presents the postoperative histo­ tion of the Horsley-Clarke apparatus to reach targets ries of patients who have been cured or markedly re­ deep in the human brain introduced a new approach to lieved of longstanding afflictions; these persons have subcortical surgery. True, as Professor Edward Kandel been followed for 10 to 15 or more years, so that the relates, Russian surgeons had pioneered in the field, results may be considered more or less permanent.