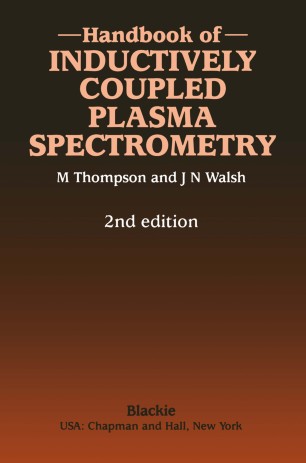 The first edition of our Handbook was written in 1983. In the preface to the first edition we noted the rapid development of inductively coupled plasma atomic emission spectrometry and its considerable potential for elemental analysis. The intervening five years have seen a substantial growth in ICP applications; much has happened and this is an appropriate time to present a revised edition. The basic approach of the book remains the same. This is a handbook, addressed to the user of the technique who seeks direct, practical advice. A concise summary of the technique is attempted. Detailed, theoretical treatment of the background to the method is not covered. We have, however, thoroughly revised much of the text, and new chapters have been added. These reflect the changes and progress in recent years. We are grateful to Mr Stephen Walton, Dr Gwendy Hall and London and Scandinavian Metallurgical Co. Ltd for their contributions. Chapter 3 (Instrumentation) has been rewritten by Mr Walton, the new Chapter on ICP-mass spectrometry has been written by Dr Hall, and London and Scandinavian provided much of the information for the chapter on metals analysis by ICP-AES. These chapters have been integrated into the book, and a conscious effort has been made to retain the unity of style within the book. New material has been added elsewhere in the book, archaeological materials are considered, pre concentration methods and chemometrics covered more fully.