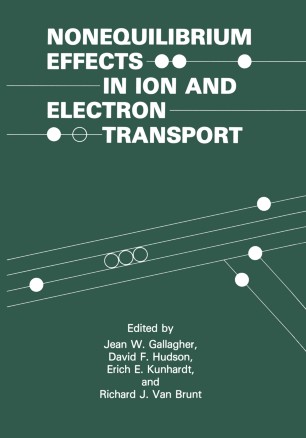 This volume presents the contributions of the participants in the Sixth International Swarm Seminar, held August 2-5, 1989, at the Webb Institute in Glen Cove, New York. The Swarm Seminars are traditionally held as relatively small satellite conferences of the International Conference on the Physics of Electronic and Atomic Collisions (ICPEAC) which occurs every two years. The 1989 ICPEAC took place in New York City prior to the Swarm Seminar. The focus of the Swarm Seminars has been on basic research relevant to understanding the transport of charged particles, mainly electrons and ions, in weakly ionized gases. This is a field that tends to bridge the gap between studies of fundamental binary atomic and molecular collision processes and studies of electrical breakdown or discharge phenomena in gases. Topics included in the 1989 seminar ranged the gamut from direct determinations of charged-particle collision cross sections to use of cross sections and swarm parameters to model the behavior of electrical gas discharges. Although the range of subjects covered was in many respects similar to that of previous seminars, there was an emphasis on certain selected themes that tended to give this seminar a distinctly different flavor. There was, for example, considerable discussion on the meaning of "equilibrium" and the conditions under which nonequilibrium effects become important in the transport of electrons through a gas.