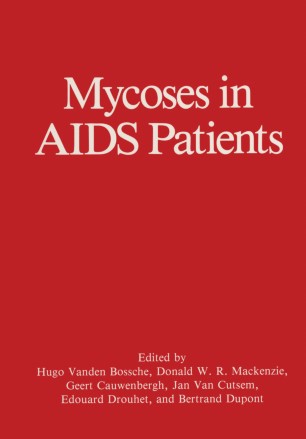 The World Health Organization estimates that at least five million people worldwide are infected with human immunodeficiency virus (HIV) Of these about 100,000 are in Asia and Oceania, 500,000 in Europe, 2 million in the Americas and 2.5 million in Africa (Mann, 1989). The acquired immunodeficiency syndrome is characterized by a derangement in cell-mediated immunity leading to opportunistic infections with for example Mycobacterium spp., Candida spp., Cryptococcus neoformans, Pneumocystis carinii, Toxoplasma gondii and Cryptosporidium. The third symposium on "Topics in Mycology" brought together 265 experts from 32 countries to discuss the epidemiology, immmunological and pathogenetic aspects of AIDS and its opportunistic infections in general and fungal infections in particular. Pneumocystis carinii pneumonia is by far the commonest opportunistic infection in AIDS patients. The nature and classification of P. carinii is still controversial. In search for its true taxonomic affinities an introductory paper formulates a number of key questions. Candidosis is another frequent opportunistic infection. A number of papers discuss the possibility that selective pressures may operate on Candida albicans within the AIDS population and influence its nature: this might have an impact on prophylaxis and curative and/or suppressive therapy.