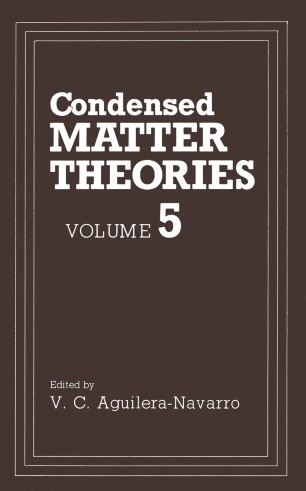 This volume gathers the invited talks of the XIII International Work­ shop on Condensed Matter Theories which took place in Campos do Jordao near Sao Paulo, Brazil, August 6-12, 1989. It contains contributions in a wide variety of fields including neutral quantum and classical fluids, electronic systems, composite materials, plasmas, atoms, molecules and nuclei, and as this year's workshop reflected the natural preoccupation in materials science with its spectacular prospect for mankind, room tempera­ ture super-conductivity. All topics are treated from a common viewpoint: that of many-body physics, whether theoretical or simu1ational. Since the very first workshop, held at the prestigious Instituto de Fisica Teorica in Sao Paulo, and organized by the same organizer of the 1989 workshop, Professor Valdir Casaca Aguilera-Navarro, the meeting has taken place annually six times in Latin America, four in Europe and three in the United States. Its principal objective has been to innitiate and nurture collaborative research networks of scientists interested in the IDultidisciplinary aspects of many-body theory applied to problems in con­ densed-matter physics. Financial as well as moral support is gratefully appreciated by all: of the CLAF in Rio, the CNPq in Brasilia, the FAPESP and the FUNDUNESP in Sao Paulo, and the U.S. Army Research Office in Durham, NC, USA.