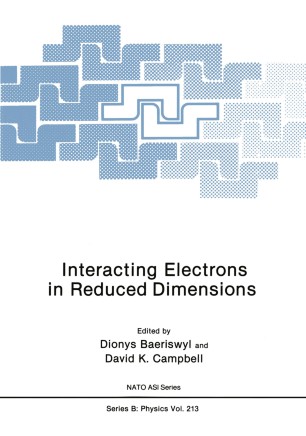 As its name suggests, the 1988 workshop on "Interacting Electrons in Reduced Dimen­ the wide variety of physical effects that are associated with (possibly sions" focused on strongly) correlated electrons interacting in quasi-one- and quasi-two-dimensional mate­ rials. Among the phenomena discussed were superconductivity, magnetic ordering, the metal-insulator transition, localization, the fractional Quantum Hall effect (QHE), Peierls and spin-Peierls transitions, conductance fluctuations and sliding charge-density (CDW) and spin-density (SDW) waves. That these effects appear most pronounced in systems of reduced dimensionality was amply demonstrated at the meeting. Indeed, when concrete illustrations were presented, they typically involved chain-like materials such as conjugated polymers, inorganic CDW systems and organie conductors, or layered materials such as high-temperature copper-oxide superconductors, certain of the organic superconductors, and the QHE samples, or devices where the electrons are confined to a restricted region of sample, e. g. , the depletion layer of a MOSFET. To enable this broad subject to be covered in thirty-five lectures (and ab out half as many posters), the workshop was deliberately focused on theoretical models for these phenomena and on methods for describing as faithfully as possible the "true" behav­ ior of these models. This latter emphasis was especially important, since the inherently many-body nature of problems involving interacting electrons renders conventional effec­ tive single-particle/mean-field methods (e. g. , Hartree-Fock or the local-density approxi­ mation in density-functional theory) highly suspect. Again, this is particularly true in reduced dimensions, where strong quantum fluctuations can invalidate mean-field results.