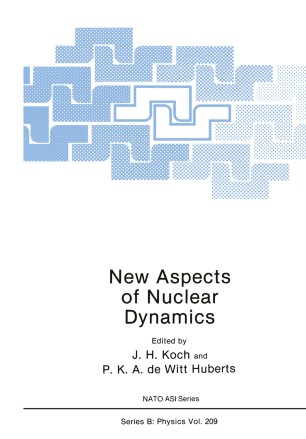 The 1988 Summer School on New Aspects of Nuclear Dynamics took place in the style that by now has become a tradition: a series of lectures by well known scientists on modem topics of nuclear physics, where special emphasis is placed on the didactic aspects of the lectures. In the past few years, we have witnessed a rapid evolution of the field of nuclear physics towards novel directions of research. This development is accompanied by the construction of some of the largest experimental facilities ever built for nuclear research. The subjects covered by the Summer School focussed on two main issues currently under active investigation and which will be pursued with the new facilities: the transition from nucleonic to quark degrees of freedom in the decription of nuclear reactions, and the behavior of nuclear matter as one approaches extreme densities and temperatures. These topics in many respects go beyond traditional nuclear physics and the speakers therefore also included high energy physicists. From the response of the participants it was clear that the program of the school filled a gap in the curriculum of many students. We wish to thank all the speakers for their well organized lectures, which were nicely geared to the level of the school, and for spending extra time on problem sessions and extensive discussions. The organization of this Summer School was made possible by substantial support from the Science Committee of the North Atlantic Treaty Organization.