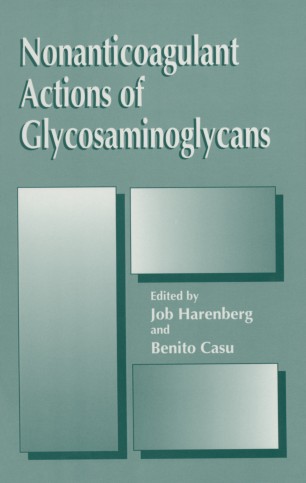 Prophylaxis and treatment of thromboembolism have made one of the major impacts in medicine. Heparin has widely been used as the most effective drug during the last 50 years. However, its potential side effects have led to the search for equally effective but safer alternatives. At present, the low-molecular-weight heparins are the most promising steps in this direction. Considerable interest has been generated at the same time in exploring other gly­ cosaminoglycans of the nonheparin type for therapeutic use. The existence of these com­ pounds has been known for a long time and substantial information has been gathered on glycosaminoglycans such as heparinsulfate, dermatansulfate, and chondroitinsulfate. Many of these substances are derived from animal or plant sources, and some of them have now been synthesized. The aim of the Fourth Symposium on Glycosaminoglycan Research at Villa Vigoni in Loveno at Lake Comolltaly was to summarize the considerable new information in this field. The articles of the present volume are mainly based on a German-Italian collaboration supported by the Vigoni Program. The selected articles describe many different, nonheparin glycosaminoglycans, some of them already in clinical trials as antithrombotic agents. In particular, the interaction of glycosaminoglycans with some cellular elements of blood, especially leukocytes and platelets, are discussed. New methods for their identification and assays are described and considerable emphasis is placed on the pharmacokinetic aspects of these new compounds. Particularly, some nonanticoagulant activities of the glycosamino­ glycans are discussed in detail.