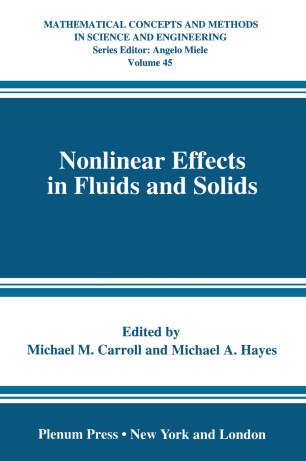 Nonlinear Effects in Fluids and Solids

Part of the Mathematical Concepts and Methods in Science and Engineering book series (MCSENG, volume 45)

This volume of scientific papers is dedicated with gratitude and esteem to Ronald Rivlin and is offered as a token of appreciation by former students, col­ laborators, and friends. Ronald Rivlin's name is synonymous with modem developments in contin­ uum mechanics. His outstanding pioneering theoretical and experimental re­ ·search in finite elasticity is a landmark. From his work there has followed a spate of developments in which he played the leading role-the theory of fiber-rein­ forced materials, the developments of the theory of constitutive equations, the theory of materials with memory, the theory of the fracture of elastomers, the theory of viscoelastic fluids and solids, the development of nonlinear crystal physics, the theory of small deformations superimposed on large, and the effect of large initial strain on wave propagation. It is in Rivlin's work that universal relations were first recognized. Here also are to be found lucid explanations of physical phenomena such as the Poynting effect for elastic rods in torsion. Addi­ tionally, he and his co-workers predicted the presence of secondary flows for viscoelastic fluids in straight pipes of noncircular cross section under a uniform pressure head. While some others may have displayed a cavalier lack of concern for physical reality and an intoxication with mathematical idiom, Rivlin has al­ ways been concerned with genuine mathematical and physical content. All of his papers contain interesting and illuminating material-and may be read with profit by anyone interested in continuum mechanics.