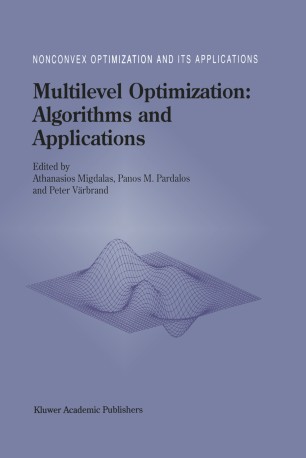 Part of the Nonconvex Optimization and Its Applications book series (NOIA, volume 20)

Researchers working with nonlinear programming often claim "the word is non­ linear" indicating that real applications require nonlinear modeling. The same is true for other areas such as multi-objective programming (there are always several goals in a real application), stochastic programming (all data is uncer­ tain and therefore stochastic models should be used), and so forth. In this spirit we claim: The word is multilevel. In many decision processes there is a hierarchy of decision makers, and decisions are made at different levels in this hierarchy. One way to handle such hierar­ chies is to focus on one level and include other levels' behaviors as assumptions. Multilevel programming is the research area that focuses on the whole hierar­ chy structure. In terms of modeling, the constraint domain associated with a multilevel programming problem is implicitly determined by a series of opti­ mization problems which must be solved in a predetermined sequence. If only two levels are considered, we have one leader (associated with the upper level) and one follower (associated with the lower level).