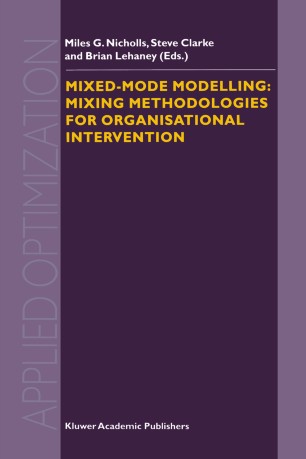 The 1980s and 1990s have seen a growing interest in research and practice in the use of methodologies within problem contexts characterised by a primary focus on technology, human issues, or power. During the last five to ten years, this has given rise to challenges regarding the ability of a single methodology to address all such contexts, and the consequent development of approaches which aim to mix methodologies within a single problem situation. This has been particularly so where the situation has called for a mix of technological (the so-called 'hard') and human­ centred (so-called 'soft') methods. The approach developed has been termed mixed-mode modelling. The area of mixed-mode modelling is relatively new, with the phrase being coined approximately four years ago by Brian Lehaney in a keynote paper published at the 1996 Annual Conference of the UK Operational Research Society. Mixed-mode modelling, as suggested above, is a new way of considering problem situations faced by organisations. Traditional technological approaches used in management science have suffered criticisms relating to their adequacy in the past few decades, and these hard approaches have been replaced by soft methods, which consider process more relevant than outcome. However, the sole use of human­ centred approaches to organisational problems has also proved to be inadequate. Mixed-mode modelling accepts the importance of both process and outcome, and provides enabling mechanisms for hard and soft investigation to be undertaken.