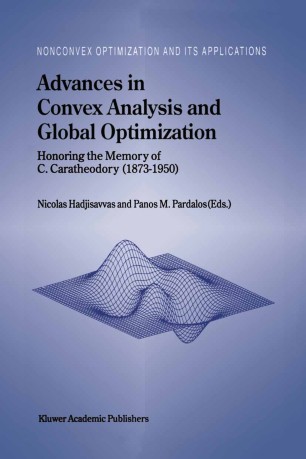 Part of the Nonconvex Optimization and Its Applications book series (NOIA, volume 54)

There has been much recent progress in global optimization algo­ rithms for nonconvex continuous and discrete problems from both a theoretical and a practical perspective. Convex analysis plays a fun­ damental role in the analysis and development of global optimization algorithms. This is due essentially to the fact that virtually all noncon­ vex optimization problems can be described using differences of convex functions and differences of convex sets. A conference on Convex Analysis and Global Optimization was held during June 5 -9, 2000 at Pythagorion, Samos, Greece. The conference was honoring the memory of C. Caratheodory (1873-1950) and was en­ dorsed by the Mathematical Programming Society (MPS) and by the Society for Industrial and Applied Mathematics (SIAM) Activity Group in Optimization. The conference was sponsored by the European Union (through the EPEAEK program), the Department of Mathematics of the Aegean University and the Center for Applied Optimization of the University of Florida, by the General Secretariat of Research and Tech­ nology of Greece, by the Ministry of Education of Greece, and several local Greek government agencies and companies. This volume contains a selective collection of refereed papers based on invited and contribut­ ing talks presented at this conference. The two themes of convexity and global optimization pervade this book. The conference provided a forum for researchers working on different aspects of convexity and global opti­ mization to present their recent discoveries, and to interact with people working on complementary aspects of mathematical programming.