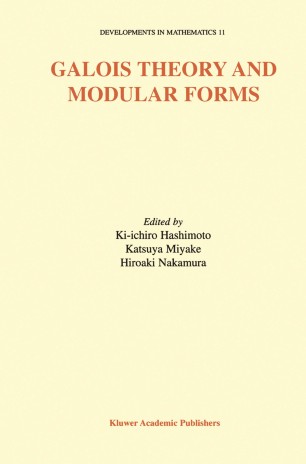 Part of the Developments in Mathematics book series (DEVM, volume 11)

This volume is an outgrowth of the research project "The Inverse Ga­ lois Problem and its Application to Number Theory" which was carried out in three academic years from 1999 to 2001 with the support of the Grant-in-Aid for Scientific Research (B) (1) No. 11440013. In September, 2001, an international conference "Galois Theory and Modular Forms" was held at Tokyo Metropolitan University after some preparatory work­ shops and symposia in previous years. The title of this book came from that of the conference, and the authors were participants of those meet­ All of the articles here were critically refereed by experts. Some of ings. these articles give well prepared surveys on branches of research areas, and many articles aim to bear the latest research results accompanied with carefully written expository introductions. When we started our re~earch project, we picked up three areas to investigate under the key word "Galois groups"; namely, "generic poly­ nomials" to be applied to number theory, "Galois coverings of algebraic curves" to study new type of representations of absolute Galois groups, and explicitly described "Shimura varieties" to understand well the Ga­ lois structures of some interesting polynomials including Brumer's sextic for the alternating group of degree 5. The topics of the articles in this volume are widely spread as a result. At a first glance, some readers may think this book somewhat unfocussed.