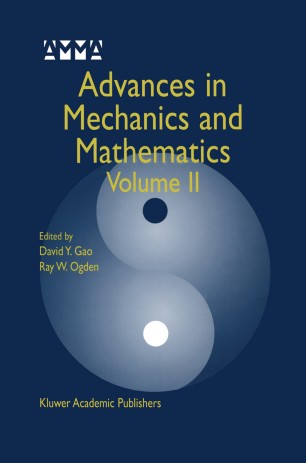 Advances in Mechanics and Mathematics

Part of the Advances in Mechanics and Mathematics book series (AMMA, volume 4)

As any human activity needs goals, mathematical research needs problems -David Hilbert Mechanics is the paradise of mathematical sciences -Leonardo da Vinci Mechanics and mathematics have been complementary partners since Newton's time and the history of science shows much evidence of the ben­ eficial influence of these disciplines on each other. Driven by increasingly elaborate modern technological applications the symbiotic relationship between mathematics and mechanics is continually growing. However, the increasingly large number of specialist journals has generated a du­ ality gap between the two partners, and this gap is growing wider. Advances in Mechanics and Mathematics (AMMA) is intended to bridge the gap by providing multi-disciplinary publications which fall into the two following complementary categories: 1. An annual book dedicated to the latest developments in mechanics and mathematics; 2. Monographs, advanced textbooks, handbooks, edited vol­ umes and selected conference proceedings. The AMMA annual book publishes invited and contributed compre­ hensive reviews, research and survey articles within the broad area of modern mechanics and applied mathematics. Mechanics is understood here in the most general sense of the word, and is taken to embrace relevant physical and biological phenomena involving electromagnetic, thermal and quantum effects and biomechanics, as well as general dy­ namical systems. Especially encouraged are articles on mathematical and computational models and methods based on mechanics and their interactions with other fields. All contributions will be reviewed so as to guarantee the highest possible scientific standards.