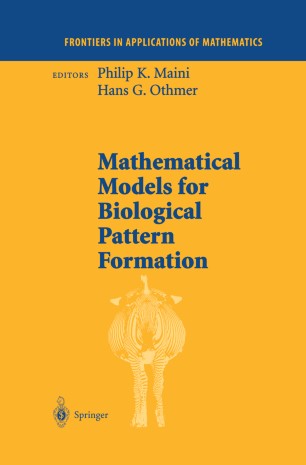 Part of the The IMA Volumes in Mathematics and its Applications book series (IMA, volume 121)

This 121st IMA volume, entitled MATHEMATICAL MODELS FOR BIOLOGICAL PATTERN FORMATION is the first of a new series called FRONTIERS IN APPLICATION OF MATHEMATICS. The FRONTIERS volumes are motivated by IMA pro­ grams and workshops, but are specially planned and written to provide an entree to and assessment of exciting new areas for the application of mathematical tools and analysis. The emphasis in FRONTIERS volumes is on surveys, exposition and outlook, to attract more mathematicians and other scientists to the study of these areas and to focus efforts on the most important issues, rather than papers on the most recent research results aimed at an audience of specialists. The present volume of peer-reviewed papers grew out of the 1998-99 IMA program on "Mathematics in Biology," in particular the Fall 1998 em­ phasis on "Theoretical Problems in Developmental Biology and Immunol­ ogy." During that period there were two workshops on Pattern Formation and Morphogenesis, organized by Professors Murray, Maini and Othmer. James Murray was one of the principal organizers for the entire year pro­ gram. I am very grateful to James Murray for providing an introduction, and to Philip Maini and Hans Othmer for their excellent work in planning and preparing this first FRONTIERS volume. I also take this opportunity to thank the National Science Foundation, whose financial support of the IMA made the Mathematics in Biology pro­ gram possible.