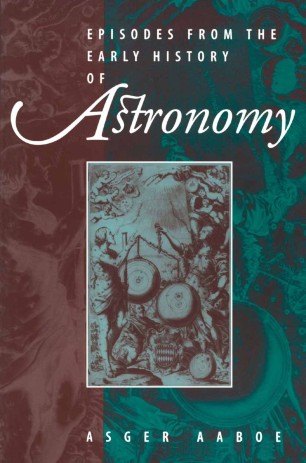 Episodes From the Early History of Astronomy

Before streets were brightly illuminated at night, astronomy was accessible to everyone and was a matter of great importance: for divination; for setting appropriate dates for planting, harvest, and festivals; for regulating lives. Phenomena in the heavens are still of great importance to many, and much of the lore of astronomy and astrology dates back to the earliest days of civilization. The astronomy of the ancients is thus of interest not only as history but also as the basis for much of what is known or believed about the heavens today. Because phenomena in the heavens are less familiar today than in earlier eras, this book begins with a brief description of what one can see in the sky on dark nights with the naked eye. It then turns to the astronomy of the Babylonians, who named many of our constellations, who are responsible for many of the fundamental insights of early astronomy, and who married mathematics to astronomy to make it an exact science. A chapter on Greek astronomy discusses various models of planetary motion, showing that the cycles and epicycles used by the Greeks have their modern counterparts in the computations used to compute the ephemeredes listed in the Nautical Almanac. The book then turns to a detailed discussion of Ptolemy's cosmology, the first to include quantitative models in an integral way. Though the Ptolemaic system is now often dismissed as unsound and inefficient, it is in fact a logically pleasing structure which, for more than a millennium, provided a framework for educated people throughout the Christian and Moslem worlds to think about the universe.

This book provides a fascinating look at the night sky and the techniques that early civilizations, particularly Babylonian and Greek, used to model planetary motions…Aaboe does a masterful job of covering a wide array of intriguing topics in a relatively short book, and any effort expended on reading it will be well rewarded… talented students at the high school age and college students who are interested in these topics would likely find this book very enjoyable and enriching…Overall, the book is fascinating to read for several reasons, including its observational astronomical viewpoint, its rich historical and cultural content, and, of course, its exposition and explanation of ancient techniques of celestial predictions and modeling.
MAA ONLINE

"The distinguished scholar and teacher Asger Aaboe has now presented us with a historical and mathematical introduction to early astronomy … . he provides the clearest presentation I have ever seen … . Aaboe’s strength lies in the clear and uncompromising mathematical elaboration of the geometrical models involved ... . this is an ideal book for those of us who want a clear introduction to early astronomical concepts, and for our students." (Stephen C. McCluskey, British Society for the History of Science, 2005)

"This nice little booklet is a companion volume to the author’s Episodes from the early history of mathematics … . It presents a general introduction to naked-eye astronomy as well as descriptions of the main characteristics of the planetary models that were in use up to the time of Kepler. … The book under review is a very handy introduction to early astronomy for any reader with some background in mathematics. It contains various beautiful illustrations and the hand-drawn figures are nearly always clear." (Benno van Dalen, Mathematical Reviews, Issue 2003 i)

"It is not wholly like an academic work, nor an introduction to cosmology nor a scientific report. Yet Aaboe combines elements of all three. … Aaboe actually is a good writer. … this is an exhaustively comprehensive coverage of the kinematics of naked eye planets and the evolution of the Western calendar … . I would keep it in my bookshelf next to other chronicles of astronomy." (Bart Connolly, Astronomy & Space, April, 2003)

"This book is a popular outline of the classic standard works written by Neugebauer, Swerdlow, Goldstein, Pedersen, and others. … Using only elementary mathematics and geometry, this book may thus be read by everyone interested in the history of celestial mechanics. It may be highly recommended for teachers in mathematics and physics or for introductory courses in positional astronomy, as well." (ORION, Vol. 61 (314), 2003)

"This Book is in no way just a familiar journey in a time machine: my interest was riveted by the author’s elucidation of the some of the background to the first great scientific revolution. He begins with a very useful pedagogic Chapter … . Altogether, an enjoyable, scholarly work … ." (Leon Mestel, The Observatory, Vol. 122 (1167), 2002)

"The author deals with various aspects of ancient astronomy … . Aaboe considers the mathematics behind these ideas … . it will prove a valuable book, and even the non-specialist may find it worth a dip into." (Jeffrey Barham, Popular Astronomy, Vol. 49 (1), 2002)

"Aaboe does a masterful job of covering a wide array of intriguing topics in a relatively short book, and any effort expended on reading it will be well rewarded. … a great book for independent reading for a motivated student who has a strong grasp of geometry and an interest in observational astronomy and its history. In particular, talented students at the high school age and college students who are interested in these topics would likely find this book very enjoyable and enriching." (Tom Brennan, MAA Online, October, 2002)

"The book begins with an introductory description … of the principal phenomena of naked eye astronomy necessary to understand what follows. … In short, Aaboe’s book provides a clear, authoritative, and frequently original introduction to the principal elements of mathematical planetary theory before Newton, which experts will find rewarding and novices accessible. It deserves and will repay a wider audience … ." (John P. Britton, Aestimatio, Issue 3, 2007)