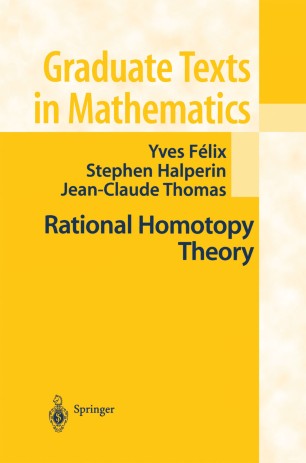 as well as by the list of open problems in the final section of this monograph. The computational power of rational homotopy theory is due to the discovery by Quillen [135] and by Sullivan [144] of an explicit algebraic formulation. In each case the rational homotopy type of a topological space is the same as the isomorphism class of its algebraic model and the rational homotopy type of a continuous map is the same as the algebraic homotopy class of the correspond­ ing morphism between models. These models make the rational homology and homotopy of a space transparent. They also (in principle, always, and in prac­ tice, sometimes) enable the calculation of other homotopy invariants such as the cup product in cohomology, the Whitehead product in homotopy and rational Lusternik-Schnirelmann category. In its initial phase research in rational homotopy theory focused on the identi­ of these models. These included fication of rational homotopy invariants in terms the homotopy Lie algebra (the translation of the Whitehead product to the homo­ topy groups of the loop space OX under the isomorphism 11'+1 (X) ~ 1I.(OX», LS category and cone length. Since then, however, work has concentrated on the properties of these in­ variants, and has uncovered some truly remarkable, and previously unsuspected phenomena. For example • If X is an n-dimensional simply connected finite CW complex, then either its rational homotopy groups vanish in degrees 2': 2n, or else they grow exponentially.