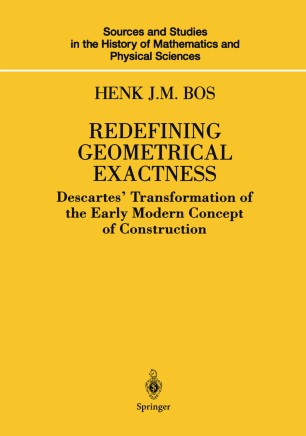 Descartes’ Transformation of the Early Modern Concept of Construction

In his "Géométrie" of 1637 Descartes achieved a monumental innovation of mathematical techniques by introducing what is now called analytic geometry. Yet the key question of the book was foundational rather than technical: When are geometrical objects known with such clarity and distinctness as befits the exact science of geometry? Classically, the answer was sought in procedures of geometrical construction, in particular by ruler and compass, but the introduction of new algebraic techniques made these procedures insufficient. In this detailed study, spanning essentially the period from the first printed edition of Pappus' "Collection" (1588, in Latin translation) and Descartes' death in 1650, Bos explores the current ideas about construction and geometrical exactness, noting that by the time Descartes entered the field the incursion of algebraic techniques, combined with an increasing uncertainty about the proper means of geometrical problem solving, had produced a certain impasse. He then analyses how Descartes transformed geometry by a redefinition of exactness and by a demarcation of geometry's proper subject and procedures in such a way as to incorporate the use of algebraic methods without destroying the true nature of geometry. Although mathematicians later essentially discarded Descartes' methodological convictions, his influence was profound and pervasive. Bos' insistence on the foundational aspects of the "Géométrie" provides new insights both in the genesis of Descartes' masterpiece and in its significance for the development of the conceptions of mathematical exactness.