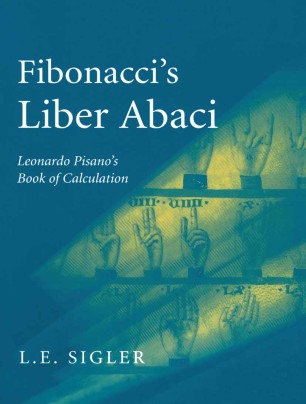 First published in 1202, Fibonacci's Liber abaci was one of the most important books on mathematics in the Middle Ages, introducing Arabic numerals and methods throughout Europe. Though it is known as an introduction to the Hindu number system and the algorithms of arithmetic that children now learn in grade school, "Liber abaci" is much more: an encyclopaedia of thirteenth-century mathematics, both theoretical and practical. It develops the tools rigorously, establishing them with Euclidean geometric proofs, and then shows how to apply them to all kinds of situations in business and trade - conversion of measures and currency, allocations of profit, computation of interest, alloying of currencies, and so forth. It is rigorous mathematics, well applied, and vividly described.

...this is an amazing book, and it is somewhat frustrating that we had to wait for the 800th anniversary of its original publication to see an English translation. But here it is at last, the Liber Abaci in English. It is now possible for mathematicians who are interested in history to read it, and for students to read portions of it in their history courses...[Fibonacci] was a great mathematician, and here is an accessible and readable edition of his most famous book. Don't miss the opportunity to get a copy.

The Liber abbaci of Leonardo Pisano (today commonly called Fibonacci) is one of the fundamental works of European mathematics. No other book did more to establish the basic framework of arithmetic and algebra as they developed in the Western world...its position as the only modern text of this fundamental work will make this translation an essential part of any collection in the history of mathematics.

...Even the Latin original has been hard to find outside the rare book room...But now this cornerstone of mathematical culture has finally become widely available with the appearance of Fibonacci's 'Liber Abaci': A Translation into Modern English of Leonardo Pisano's Book of Calculation.