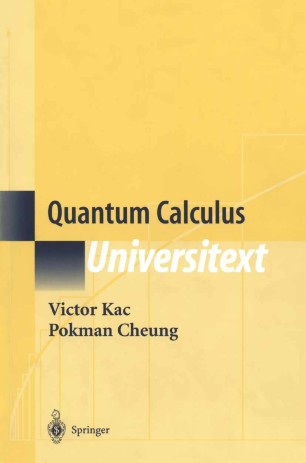 Simply put, quantum calculus is ordinary calculus without taking limits. This undergraduate text develops two types of quantum calculi, the q-calculus and the h-calculus. As this book develops quantum calculus along the lines of traditional calculus, the reader discovers, with a remarkable inevitability, many important notions and results of classical mathematics.
This book is written at the level of a first course in calculus and linear algebra and is aimed at undergraduate and beginning graduate students in mathematics, computer science, and physics. It is based on lectures and seminars given by Professor Kac over the last few years at MIT.
Victor Kac is Professor of Mathematics at MIT. He is an author of 4 books and over a hundred research papers. He was awarded the Wigner Medal for his work on Kac-Moody algebras that has numerous applications to mathematics and theoretical physics. He is a honorary member of the Moscow Mathematical Society.
Pokman Cheung graduated from MIT in 2001 after three years of undergraduate studies. He is presently a graduate student at Stanford University.