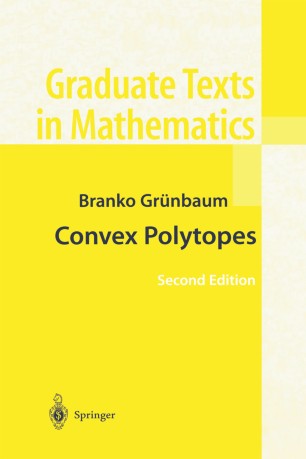 "The appearance of Grünbaum's book Convex Polytopes in 1967 was a moment of grace to geometers and combinatorialists. The special spirit of the book is very much alive even in those chapters where the book's immense influence made them quickly obsolete. Some other chapters promise beautiful unexplored land for future research. The appearance of the new edition is going to be another moment of grace. Kaibel, Klee and Ziegler were able to update the convex polytope saga in a clear, accurate, lively, and inspired way." (Gil Kalai, The Hebrew University of Jerusalem)

"The original book of Grünbaum has provided the central reference for work in this active area of mathematics for the past 35 years...I first consulted this book as a graduate student in 1967; yet, even today, I am surprised again and again by what I find there. It is an amazingly complete reference for work on this subject up to that time and continues to be a major influence on research to this day." (Louis J. Billera, Cornell University)

"The original edition of Convex Polytopes inspired a whole generation of grateful workers in polytope theory. Without it, it is doubtful whether many of the subsequent advances in the subject would have been made. The many seeds it sowed have since grown into healthy trees, with vigorous branches and luxuriant foliage. It is good to see it in print once again." (Peter McMullen, University College London)