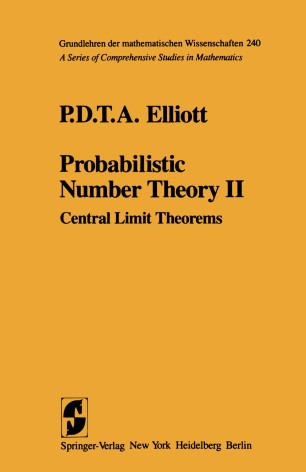 In this volume we study the value distribution of arithmetic functions, allowing unbounded renormalisations. The methods involve a synthesis of Probability and Number Theory; sums of independent infinitesimal random variables playing an important role. A central problem is to decide when an additive arithmetic function fin) admits a renormalisation by real functions a(x) and {3(x) > 0 so that asx ~ 00 the frequencies vx(n;f (n) - a(x) :s;; z {3 (x) ) converge weakly; (see Notation). In contrast to volume one we allow {3(x) to become unbounded with x. In particular, we investigate to what extent one can simulate the behaviour of additive arithmetic functions by that of sums of suit­ ably defined independent random variables. This fruiful point of view was intro­ duced in a 1939 paper of Erdos and Kac. We obtain their (now classical) result in Chapter 12. Subsequent methods involve both Fourier analysis on the line, and the appli­ cation of Dirichlet series. Many additional topics are considered. We mention only: a problem of Hardy and Ramanujan; local properties of additive arithmetic functions; the rate of convergence of certain arithmetic frequencies to the normal law; the arithmetic simulation of all stable laws. As in Volume I the historical background of various results is discussed, forming an integral part of the text. In Chapters 12 and 19 these considerations are quite extensive, and an author often speaks for himself.