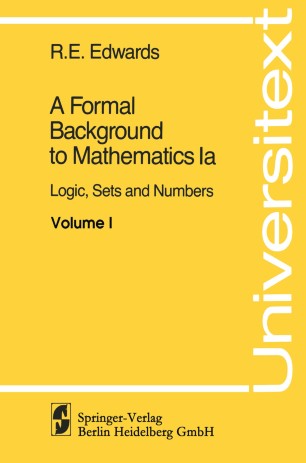 A Formal Background to Mathematics

§1 Faced by the questions mentioned in the Preface I was prompted to write this book on the assumption that a typical reader will have certain characteristics. He will presumably be familiar with conventional accounts of certain portions of mathematics and with many so-called mathematical statements, some of which (the theorems) he will know (either because he has himself studied and digested a proof or because he accepts the authority of others) to be true, and others of which he will know (by the same token) to be false. He will nevertheless be conscious of and perturbed by a lack of clarity in his own mind concerning the concepts of proof and truth in mathematics, though he will almost certainly feel that in mathematics these concepts have special meanings broadly similar in outward features to, yet different from, those in everyday life; and also that they are based on criteria different from the experimental ones used in science. He will be aware of statements which are as yet not known to be either true or false (unsolved problems). Quite possibly he will be surprised and dismayed by the possibility that there are statements which are "definite" (in the sense of involving no free variables) and which nevertheless can never (strictly on the basis of an agreed collection of axioms and an agreed concept of proof) be either proved or disproved (refuted).