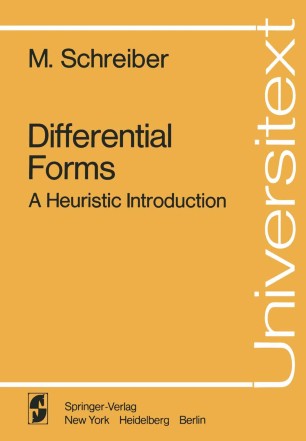 A working knowledge of differential forms so strongly illuminates the calculus and its developments that it ought not be too long delayed in the curriculum. On the other hand, the systematic treatment of differential forms requires an apparatus of topology and algebra which is heavy for beginning undergraduates. Several texts on advanced calculus using differential forms have appeared in recent years. We may cite as representative of the variety of approaches the books of Fleming [2], (1) Nickerson-Spencer-Steenrod [3], and Spivak [6]. . Despite their accommodation to the innocence of their readers, these texts cannot lighten the burden of apparatus exactly because they offer a more or less full measure of the truth at some level of generality in a formally precise exposition. There. is consequently a gap between texts of this type and the traditional advanced calculus. Recently, on the occasion of offering a beginning course of advanced calculus, we undertook the expe- ment of attempting to present the technique of differential forms with minimal apparatus and very few prerequisites. These notes are the result of that experiment. Our exposition is intended to be heuristic and concrete. Roughly speaking, we take a differential form to be a multi-dimensional integrand, such a thing being subject to rules making change-of-variable calculations automatic. The domains of integration (manifolds) are explicitly given "surfaces" in Euclidean space. The differentiation of forms (exterior (1) Numbers in brackets refer to the Bibliography at the end.