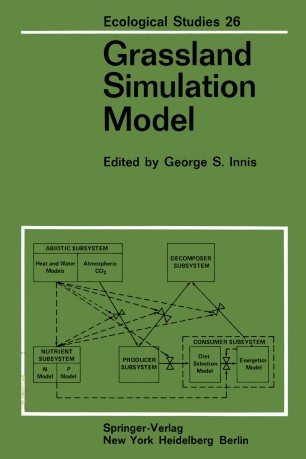 Perspectives on the ELM Model and Modeling Efforts This volume is the major open-literature description of a comprehensive, pioneering ecological modeling effort. The ELM model is one of the major outputs of the United States Grassland Biome study, a contribution to the International Biological Program (IBP). Writing this introduction provides wel­ come personal opportunity to (i) review briefly the state of the art at the beginning of the ELM modeling effort in 1971, (ii) to discuss some aspects of the ELM model's role in relation to other models and other phases of the Grassland Biome study, and (iii) to summarize the evolution of ELM or its components since 1973. Pre-Program Historical Perspective My first major contacts with ecological simulation modeling were in 1960 when I was studying intraseasonal herbage dynamics and nutrient production on foothill grasslands in southcentral Montana, making year-round measurements of the aboveground live vegetation, the standing dead, and the litter. Limitations in funding and the rockiness of the foothill soils prevented measuring the dynamics of the root biomass, both live and dead. Herbage biomass originates in live shoots from which it could be translocated into live roots or the live shoots could transfer to standing dead or to litter. Standing dead vegetation must end up in the litter and the live roots eventually transfer to dead roots. Obviously, the litter and the dead roots must decay away.