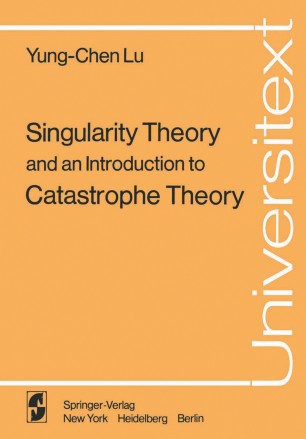 Singularity Theory and an Introduction to Catastrophe Theory

In April, 1975, I organised a conference at the Battelle Research Center, Seattle, Washington on the theme "Structural stability, catastrophe theory and their applications in the sciences". To this conference were invited a number of mathematicians concerned with the mathematical theories of structural stability and catastrophe theory, and other mathematicians whose principal interest lay in applications to various sciences - physical, biological, medical and social. Rene Thorn and Christopher Zeeman figured in the list of distinguished participants. The conference aroused considerable interest, and many mathematicians who were not specialists in the fields covered by the conference expressed their desire to attend the conference sessions; in addition, scientists from the Battelle laboratories came to Seattle to learn of developments in these areas and to consider possible applications to their own work. In view of the attendance of these mathematicians and scientists, and in order to enable the expositions of the experts to be intelligible to this wider audience, I invited Professor Yung­ Chen Lu, of Ohio State University, to come to Battelle Seattle in advance of the actual conference to deliver a series of informal lecture-seminars, explaining the background of the mathematical theory and indicating some of the actual and possible applications. In the event, Yung-Chen Lu delivered his lectures in the week preceding and the week following the actual conference, so that the first half of his course was preparatory and the second half explanatory and evaluative. These lecture notes constitute an expanded version of the course.