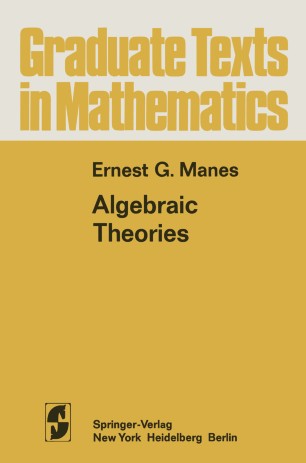 In the past decade, category theory has widened its scope and now inter­ acts with many areas of mathematics. This book develops some of the interactions between universal algebra and category theory as well as some of the resulting applications. We begin with an exposition of equationally defineable classes from the point of view of "algebraic theories," but without the use of category theory. This serves to motivate the general treatment of algebraic theories in a category, which is the central concern of the book. (No category theory is presumed; rather, an independent treatment is provided by the second chap­ ter.) Applications abound throughout the text and exercises and in the final chapter in which we pursue problems originating in topological dynamics and in automata theory. This book is a natural outgrowth of the ideas of a small group of mathe­ maticians, many of whom were in residence at the Forschungsinstitut für Mathematik of the Eidgenössische Technische Hochschule in Zürich, Switzerland during the academic year 1966-67. It was in this stimulating atmosphere that the author wrote his doctoral dissertation. The "Zürich School," then, was Michael Barr, Jon Beck, John Gray, Bill Lawvere, Fred Linton, and Myles Tierney (who were there) and (at least) Harry Appelgate, Sammy Eilenberg, John Isbell, and Saunders Mac Lane (whose spiritual presence was tangible.) I am grateful to the National Science Foundation who provided support, under grants GJ 35759 and OCR 72-03733 A01, while I wrote this book.