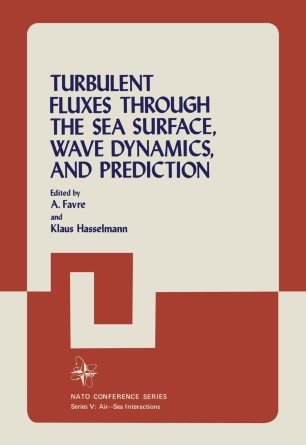 Turbulent Fluxes Through the Sea Surface, Wave Dynamics, and Prediction

A primary aim of the NATO Science Committee since its estab­ lishment in 1958 has been to· further international scientific co­ operation among scientists from the member countries of the Alliance. Almost all fields of basic science have received sub­ stantial support for the purposes of enhancing exchange of inform­ ation, providing opportunities for advanced instruction and collaborative research. Up to 1977, more than 10,000 fellowships have been awarded to allow scientists to complete their scientific education in another country and more than 1,500 joint research projects involving scientists in at least two different countries per project have been financed by the Committee. In addition, more than 800 advanced study institutes have been held under NATO auspices which have allowed more than sixty thousand scientists to get together to hear leading scientists lecture on advanced research topics on the frontier of research of many disciplines and to discuss the most recent results of their research activi­ ties. The Science Committee also identifies specific areas as deserving special encouragement or preferential support for limited periods. A variety of mechanisms - research grants, study visits, conferences, etc. - is utilized to stimulate greater international activity. This effort is embodied in several individual programmes, each guided by a special programme panel of internationally eminent experts. Air-sea interaction is one of these programmes.