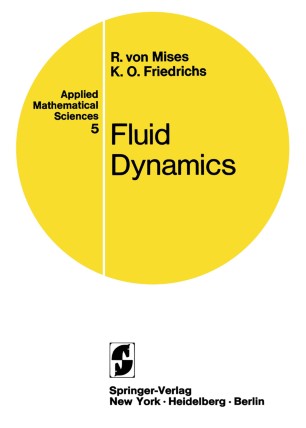 In the summer of 1941 Brown University undertook a Program of Advanced Instruction and Research in Mechanics. This in fact was the precursor to the present day Division of Applied Mathematics. Certainly an outstanding feature of this program must have been the lectures in Fluid Dynamics by Professor Friedrichs and the late Professor von Mises. Their notes were prepared in mimeograph form and given a wide distribution at that time. Since their appearance these lectures have had a strong influence on teaching and research in the subject. As the reader soon learns the notes have lost none of their vitality over the years. Indeed in certain instances only in the last few years has the -field caught up with the ideas developed in the course of these lectures. Many ideas of value are still to be found in these notes and the Editors are most happy to be able to include this volume in the series. The corrections which have accumulated over the years have been incorporated, and in addition an index has been added. With these exceptions all desire to revise has been resisted. Also in this connection we are very grateful to Dr. T. H. Chong for carefully overseeing the preparation of the present manuscript.