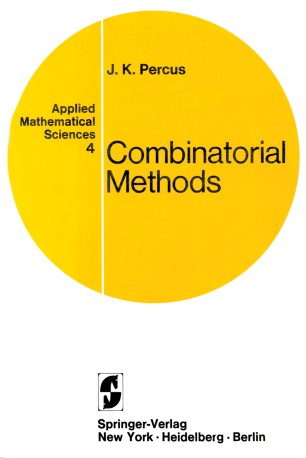 It is not a large overstatement to claim that mathematics has traditionally arisen from attempts to understand quite concrete events in the physical world. The accelerated sophistication of the mathematical community has perhaps obscured this fact, especially during the present century, with the abstract becoming the hallmark of much of respectable mathematics. As a result of the inaccessibility of such work, practicing scientists have often been compelled to fashion their own mathematical tools, blissfully unaware of their prior existence in far too elegant and far too general form. But the mathematical sophistication of scientists has grown rapidly too, as has the scientific sophistication of many mathematicians, and the real worl- suitably defined - is once more serving its traditional role. One of the fields most enriched by this infusion has been that of combinatorics. This book has been written in a way as a tribute to those natural scientists whose breadth of vision has inparted a new vitality to a dormant giant. The present text arose out of a course in Combinatorial Methods given by the writer at the Courant Institute during 1967-68. Its structure has been determined by an attempt to reach an informed but heterogeneous group of students in mathematics, physics, and chemistry. Its lucidity has been enhanced immeasurably by the need to satisfy a very resolute critic, Professor Ora E. Percus, who is responsible for the original lecture notes as well as for their major modifications.