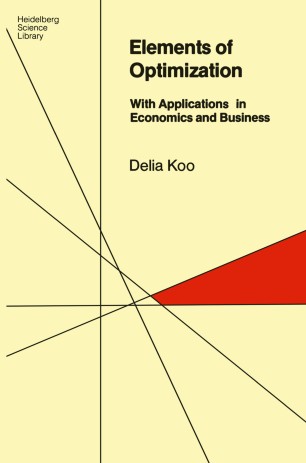 With Applications in Economics and Business

This book attempts to present the concepts which underlie the various optimization procedures which are commonly used. It is written primarily for those scientists such as economists, operations researchers, and en­ gineers whose main tools of analysis involve optimization techniques and who possess a (not very sharp) knowledge of one or one-and-a-half year's calculus through partial differentiation and Taylor's theorem and some acquaintance with elementary vector and matrix terminology. Such a scientist is frequently confronted with expressions such as Lagrange multi­ pliers, first-and second-order conditions, linear programming and activity analysis, duality, the Kuhn-Tucker conditions, and, more recently, dy­ namic programming and optimal control. He or she uses or needs to use these optimization techniques, and would like to feel more comfortable with them through better understanding of their underlying mathematical concepts, but has no immediate use for a formal theorem-proof treatment which quickly abstracts to a general case of n variables and uses a style and terminology that are discouraging to people who are not mathematics majors. The emphasis of this book is on clarity and plausibility. Through examples which are worked out step by step in detail, I hope to illustrate some tools which will be useful to scientists when they apply optimization techniques to their problems. Most of the chapters may be read independently of each other-with the exception of Chapter 6, which depends on Chapter 5. For instance, the reader will find little or no difficulty in reading Chapter 8 without having read the previous chapters.